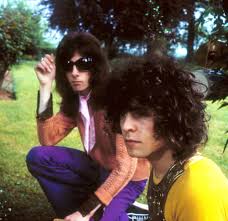 When John’s Children collapsed (amongst other problems, the band were stunned to discover their equipment had been stolen from a studio, according to a Bolan biographer), Bolan and Steve Peregrine Took created Tyrannosaurus Rex, a psychedelic-folk rock acoustic duo, playing Bolan’s songs, with Took playing assorted hand and kit percussion and occasional bass to Bolan’s acoustic guitars and voice.

of Tyrannosaurus Rex released four albums and four singles, flirting with the charts, reaching as high as number fifteen and supported with airplay by Radio 1 DJ John Peel. One of the highlights of this era was when the duo played at the first free Hyde Park concert in 1968. Although the free-spirited, drug-taking Took was fired from the group after their first American tour, they were a force to be reckoned within the hippy underground scene while they lasted.

Their music was filled with Marc’s otherworldly poetry, a book of which he published in 1969,

‘The Warlock Of Love’. In keeping with his early rock and roll interests, Bolan began bringing amplified guitar lines into the duo’s music, buying a vintage Gibson Les Paul guitar (later featured on the cover of the album T. Rex in 1970). After replacing Took with Mickey Finn, he let the electric influences come forward even further on A Beard of Stars, the final album to be credited to Tyrannosaurus Rex. It closed with the song “Elemental Child,” featuring a long electric guitar break influenced by Jimi Hendrix.

Bolan, by now married to his girlfriend June Child (a former secretary to the manager of another of his heroes, Syd Barrett), shortened the group’s name to T. Rex and wrote and recorded