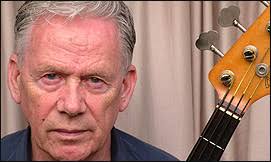 He is noted as a member of Blue

Mink, T.Rex and Sky and as one of Britain’s best-known session bass-players, having contributed to recordings by Elton John (Tumbleweed Connection etc.), David Bowie (Space Oddity), Lou Reed (including the prominent bass line of “Walk on the Wild Side”), David Essex, Allan Clarke, Al Kooper, Harry Nilsson, Cat Stevens, Serge Gainsbourg and George Harrison: he also played bass on Jeff Wayne’s Musical Version of The War of the Worlds. By the end of the 1970s Flowers had played bass on an estimated 500 hit recordings.

his musical training when conscripted into the Royal Air Force: electing at first to serve as a bandsman playing tuba, he took up double bass as a second instrument in order to secure his corporal’ stripes and later moved to electric bass. After completing his national service he passed through the lineups of several Dixieland jazz bands in the early ’60s,

then discovered modern jazz. In 1965 he was engaged as a bandsman on the ocean liner Queen Elizabeth. In New York, after hearing a jazz electric bass, he acquired his own solid-body electric instrument, a 1959 Fender Jazz Bass that he purchased from Manny’s in New York City for $79.

Later in the 1960s Flowers began to acquire his reputation as a session-player,

working for record producers such as Shel Talmy and Tony Visconti.

the group Blue Mink and played on their song “Melting Pot”, which reached #3 in the UK Singles Chart. He was a member of CCS, and later featured in a mid-1970s line-up of T. Rex. In 1979, shortly after taking part in the annual A Song For Europe contest, performing “Mr. Moonlight” with his group, “The Daisies”, he became a co-founder of the band Sky, which had considerable success in the United Kingdom and Australia.

Flowers is also known for having composed the novelty hit “Grandad” for Clive Dunn. According to Flowers, he came up with it after following an easy primer book on composing. All he needed was a hook, and he was struggling to come up with anything. He phoned a friend (Ken

Pickett) who came round, ringing the doorbell, and the ding-dong from the doorbell provided the hook he needed. Flowers reprised his performance on bass guitar for the 2006 – 2007 live tour of the stage performance of Jeff Wayne’s Musical Version of the War of the Worlds, also appearing in the 2006 DVD release of the production.

Since Sky’s demise in the early 1990s Flowers has spent most of his time playing jazz. He also works as a bass guitar teacher at Ardingly College, and leads many ‘rockshops’ at schools, helping children to create and perform their own songs, as well as covering many others. In September 2009 Herbie founded a community choir “Shoreham Singers by Sea” which now

(May 2011) has in excess of 200 members and is performing publicly to some acclaim.