“Flo” aka “Phlorescent Leech” and Howard Kaylan, “Eddie”) are a comedic musical duo. The two were the original founding members of the Top 40 rock group the Turtles. After the Turtles dissolved, Volman and Kaylan first joined the Mothers of Invention as “Phlorescent Leech & Eddie”. Due to contractual restrictions made early in their career, Mark and Howard were prevented from using the name “The Turtles”, as well as their own names in a musical context. The Phlorescent Leech and Eddie were actual nicknames of two of the Mothers of Invention road crew.

Kaylan and Volman continued to do session work, lending their trademark harmonies to T.Rex, Background vocalists. They added the Zest to “Hot Love” and other Gems from “E.W” & “T.Rex” LP’s, also joined Marc again for the “Futuristic Dragon” LP. 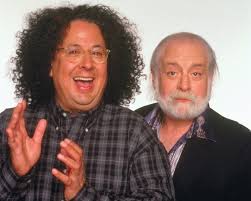 In 1984, as “The Turtles …featuring Flo & Eddie”, (together with three other groups from the 1960s: Gary Puckett, Spanky and Our Gang, and The Association), they traveled across the US and Canada as “The Happy Together Tour”. The following year they got together with The Buckinghams, Gary Lewis and

The Grass Roots, for a 1985 version. For the eight months the tour was on the road, it was consistently one of the top 10 grossing tours in the country. During of summers of 2010 and 2011, Flo & Eddie had heavy touring schedules throughout the U.S. both as part of the Happy Together: 25th Anniversary Tour, along with The Grass Roots, Mark Lindsay, The Buckinghams, and ‘Monkees’ member Micky Dolenz (2010 only).

They also created the music for the films Down and Dirty Duck and The Adventures of the American Rabbit.