collaborations from 1977  including the Marc Shows etc.

John Cambridge – Drummer. A brief involvement in the tongue-in-cheek  outfit Dib Cochran & The Earwigs (with whom he recorded the track Oh Baby sometime in 1970) 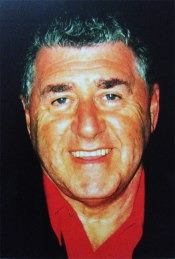 Nodge Davis – Sound Engineer on 74 US tour.Quit halfway through  because of Marcs attitude and drunkeness.

Dino Dines –  T.Rex Keyboards 1973/4-77. and friend of Marc’s. One of the Long Time T.Rex members and has been “critically” acclaimed as the Man that helped bring Marc’s magic to the stage. Dino died Jan 04′ He is survived by Two sons, both musicians-

Donovan– Lots of “rumours” circulate about Marc and Donovan’s sessions. In  an interview done with Steve Currie by Steve Dixon for the “Tribute” Book.  Steve says  “I remember doing some sessions with Donovan in Munich, Marc was semi-producing, semi-advising, he was in the studio every two minutes telling Donovan what to play and how to play it” 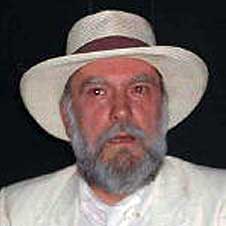 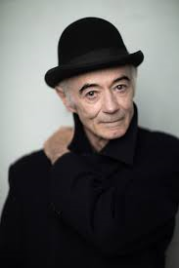 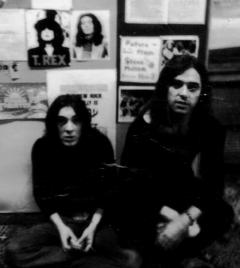 Mary Hopkins – Welsh singer & ex-wife of Tony Visconti. Sings on 1971 demo’s of Cadilac & Truck On (Tyke). Had a worldwide hit with her recording “Those Were the Days”

Elton John – Piano on the Born To Boogie film. Wrote song “Wanna be a Teenage Idol” as a nod to Marc

John Loydd – Owner of Alcazura who supplied Marcs stage cloths 71-74 John killed himself by setting fire to himself!.

Alphi O’ Leary – Marc’s chauffeur. Sang some back up on the “It’s a T.Rexmas” clip

Zandra Rhodes – fashion designer who created a set of stage costumes for Marc in late 1972.

Captain Sensible – Guitarist for the Damned who toured with T.Rex

Tony Secunda – Manager, 1970-72. Tony was a successful manager, starting in the 60’s with the Move, and enabled Marc to get the lucrative deals with EMI and Reprise etc. He died in the late 90’s

Tyrone Scott, Second keyboardist and backing vocals for T.Rex on the Futuristic Dragon tour 1976 along with Gloria. Also appeared in the 1967 cast of the L.A. production of “Hair”.

Tony Smith – With his father John, promoted Marc in Uk from 1970 to ’77 with the exception of 1976. Today manages Genesis, Phil Collins and Mike and Mechanics.

Ringo Starr, Produced the “Born To Boogie” film. Marc plays session guitar on the “Ringo” LP, Recently Ringo has said in an interview that “Back off Boogaloo” was written as a nod to a Slang word of Marc’s. Ringo is credited on the Slider LP as taking the cover Photo though the truth has come out from Tony Visconti that he indeed took the picture but Marc thought it would look better having Ringo listed.**Update 05’** After years of legalities B.T.B was released on DVD May 16th 05’with Five Hours of pure Magic (included is the Afternoon show as well)

Stephanie Spruill – Background vocals for T.Rex 1973 tour Along with Gloria, she provided vocals for Big Carrot which produced one single “Blackjack”/”Squint Eye Mangle” on EMI in 1973 written and produced by Marc.

Mike Stavrous – Studio engineer – originally employed at Scorpio Studios in London and then at AIR Studios. Worked with Marc from 1975 onwards. Later went on to produce the second Siouxsie And The Banshees album ‘Join Hands’ as well as engineer their cover version of Marc’s “20th Century Boy”.

John Temple – Marc did modeling work for Temple in 1964 -highlighted in ” Styles to suit you, Suits to Style you” Brochure.

Tim Van Rillim – Producer of the Film “Born To Boogie” based around The T.Rex concert at Whembley during the Hieght of “Bolanmania”

Neil Warnock – Agent to T Rex after Tony Howard became Manager, today the biggest Agent in Europe if not the World.

Michael Wale – Writer, wrote articles on Marc and in 1972 did an extensive interview for the Vox Pop Book.

Roy Wood – Friend and former member of Move, ELO & Wizzard. Performs home duet session with Marc, circa 1975. Much sought after and great to hear Marc speaking so openly about music and his influences

Murial Young, Was an advocate in getting Marc his shows “MARC” on Granada Television. Muriel Young died 23/3/01 in Newcastle aged 77