Mickey Finn and Marc Bolan made a perfect team when they launched T.Rex on the road to glam rock stardom in 1970. Finn was good-looking, an energetic conga player and prepared to accept that Bolan was the senior partner. As for Bolan, his new stage partner arrived just at the right moment, as he sought the acceptance of pop fans and attempted to shake off his old hippie image.

Finn replaced Bolan’s former bongo-playing partner Steve Peregrine Took in December 1970 and found himself enjoying the full blast of “T.Rexstasy”, as the fan fever which soon overtook the duo was dubbed. During their peak years together, Bolan and Finn enjoyed a string of Top Ten smash hits, including “Ride a White Swan” (1970), “Hot Love” (1971), “Get It On” (1971) and “Metal Guru” (1971).

Bolan was the focus of most media attention, a fact which began to put a strain on his relationship with Finn. But Bolan always needed support to boost his confidence, both as an artist and in his personal life. Finn was undoubtedly a good mate to have around in the studio and on the road. He provided backing vocals and percussion, but also presented a good contrasting image on stage. He was tall, bearded and quietly spoken while Bolan was small, curly headed and extrovert.

Finn was called into service after Steve Took had begun to freak out during a 1969 American tour. Bolan and Took had originally formed Tyrannosaurus Rex as an acoustic duo in 1968 and released their début single “Debora” and the album My People Were Fair and Had Sky in Their Hair But Now They’re Content to Wear Stars on Their Brows. After distressing scenes backstage with Took in America, Bolan and his wife June Child returned to London determined to find a new percussionist. They placed an advertisement in Melody Maker’s “Musicians Wanted” column seeking “a gentle guy to play bongos”.

In the event, Mickey Finn was found by other means. Several have laid claim to introducing Finn to Bolan. June Child said that Finn was recommended by her friend John Lloyd, who described him as “a painter”. She later discovered Finn was actually a house painter, who had worked on a mural for the Apple Boutique. She recalled later:

He couldn’t play bongos particularly well but he was beautiful. Mickey came round to the flat [in Blenheim Crescent, Notting Hill] and played all day and I sat outside in the car while they got on with it.

Marc later told June: “He can’t sing. I don’t know what to do. But he looks superb.”

As part of his hands-on approach to publicity, Marc Bolan brought the new recruit to the Melody Maker office in Fleet Street. The pair arrived unannounced at lunch time and staged an impromptu concert. Finn was a silent young man who obeyed Bolan’s every command. “This is Mickey – we’ve been busy writing some new songs. Would you like to hear them?” said Bolan.

Clad in bright yellow trousers, he perched on a desk, strummed his guitar and sang at the top of his voice, while Finn beat time on typewriters with his bare hands. This “live” selection from their new album, A Beard of Stars, caused such a commotion there were complaints from other magazines, whose staff banged in protest on the walls. Within a year, the duo were superstars and any sighting of Finn or Bolan near the MM office brought an invasion of screaming teenaged girls.

Like Bolan, Finn was a former Mod who had done some agency modelling. Jeff Dexter recalls meeting him at the Orchid Ballroom, Purley in 1963, where Dexter was the house DJ: 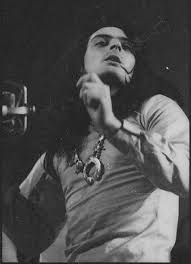 Mickey was a regular punter who came to our Wednesday night record sessions. He didn’t know Marc Bolan until me and my pal, the photographer Peter Sanders introduced them. Mickey later came up to town and hung out with the Chelsea crowd. He ended up working with Hapsash & the Coloured Coat.

The latter was a blues group that included Tony McPhee of the Groundhogs on guitar and Finn on percussion. Dexter recalls,

I remember him banging away in the background on their first album. I don’t think Mickey took himself seriously as a musician until he joined Marc, but he always fancied himself as a bit of a bongo player. When Pete suggested Mickey to Marc, I thought he was perfect for the part.

Finn made his début with T.Rex on John Peel’s Radio 1 show Top Gear on 17 November 1969 and first performed in public with Bolan at Manchester Free Trade Hall on the 21st. He was also employed to overdub drums, cymbals and backing vocals on A Beard of Stars released in March 1970. When Finn shaved off his “beard of stars” without warning, Bolan was furious and wouldn’t speak to him for two days.

In October 1970 Bolan abbreviated Tyrannosaurus Rex to T.Rex. The driving rocker “Ride a White Swan” got to No 2 in the UK charts in December. At the same time Bolan expanded the duo to a full-sized band with Finn (percussion), Steve Currie (bass) and Will Legend (drums). It was the start of the glam rock Seventies and T.Rex became megastars alongside Elton John and David Bowie. They played to crowds of over 100,000 and eventually sold 40 million albums.

They were frequently mobbed on stage, and tensions often ran high within the band. Bolan admitted that he once kicked and swore at Finn when he couldn’t play the congas one night, protesting that he had injured his hand. Their relationship deteriorated and in December 1974 Finn left the band. Dexter says,

The unfortunate thing was Mickey kind of destroyed himself later in life by overdoing things. Marc was very hot on “weakness” and that’s why he was suddenly out of T.Rex. It was really Mickey’s fault, although the early tours he did with Marc were perfect.

Marc Bolan began to work more closely with the US soul singer and producer Gloria Jones, who became his girlfriend, and he was enjoying a comeback after a slide in popularity, when he was killed in a car crash on Barnes Common, London, on 16 September 1977. Currie also died in a car crash a year later and Took choked to death in 1980.

During the 1990s, Finn suffered ill-health but began performing “live” with his band as “Mickey Finn’s T.Rex” and they played at a commemoration in Bradford of the 25th anniversary of Marc Bolan’s death in September. His group had been due to embark on a European tour in spring 2003.