Gloria was born in Cincinnati, and moved to Los Angeles, California, at the age of seven, where she first started singing. Her first taste of fame came at the age of 14, when, while still at school, she formed with Frankie Kahrl and Billy Preston the successful gospel group the Cogic Singers, with whom she recorded the album” its a Blessing”.In 1964, in her late teens, she was discovered by the songwriter Ed Cobb . Signing with Cobb’s Greengrass Productions, she recorded her first hit, “Heartbeat Pts 1 & 2,” which Cobb wrote and produced.became a rhythm and blues tune which was recorded later by Dusty Springfield, Spenser Davies and many other artists.

other songs for Uptown Records.

Included among these was another Cobb-written song, “Tainted Love”. Marc Almond (note the spelling of the name) of the duo Soft Cell, whose cover version of “Tainted Love” reached No.1worldwide, originally heard the song in a nightclub in Northern England. So strong was Jones’s following there that she was proclaimed the

Gloria first met Bolan in 1969 at a party in LA. Jones was playing the piano when he walked in. Bolan, she remembers, was wearing a cape ‘like a pair of wings’. Somebody said he was going to be ‘the next Beatles’. She’d never

heard of him. ‘I went into the kitchen, and a dog was sniffing him. And Marc kicked the dog. I said, “Do you do this to everyone?” And he said, “I’ll kick anyone that’s smelling my balls.” ‘

The daughter of a Pentacostalist preacher, Jones had enjoyed some success as a soul singer (in 1965 she recorded the original version of Tainted Love – later a million-seller for Soft Cell), and as a writer-producer for Motown records. At the time she met Bolan she was appearing on stage in the musical Hair. Nothing came of the first meeting, but their paths continued

to cross, and in 1973 Bolan invited Jones to audition for a job as a backing singer with his band. ‘Marc always knew the future – I would call him psychic,’ she says. Immediately after her audition, Bolan returned to London

and wrote her into his will as his ‘secretary’. For a year, their relationship was purely platonic. After five years together, Bolan was in the process of breaking up with June, and Jones’s marriage to a baseball coach was also falling apart. Their relationship was finally consummated in Florida, with a typically grandiose gesture. ‘He asked me, what would you like for dinner? I said seafood. We jumped into a limo and went down to a seafood restaurant and he

ordered everything on the menu: $150 worth of seafood, about 30 boxes. And that was it.’

(My life with Bolan  Read Glorias’ interview with Caroline Hedley )

By the time Jones

and Bolan got together,

he had begun to live the peripatetic life of the tax exile. For three years they moved between London, Monte Carlo and Los Angeles; years in which Bolan gradually, but inexorably, slid from the top. According to one acquaintance, Jones’s arrival changed Bolan’s life, ‘in that he had someone to believe everything he said’. Jones sees it differently. ‘People say I was in awe of Marc, but it wasn’t like that. I didn’t go into the relationship with him because he was a star. I respected him, and he respected me.’ She and Bolan, she says, ‘were of the same souls. He was a Libra; I’m a Libra. We understood each other.’ The

Marc Bolan she knew was ‘very serious about life, very sensitive’. She pauses. ‘But then there’s the other side; the rock’n’roll side?’ The drinking and drug-taking, which Jonesprefers not to dwell on.

through it all. You see things happening, but when it comes to the man of the household, what can a wife really say until the man makes a decision to change?’ Bolan, she says, loved being a star. ‘But he didn’t realise the fans could change.

And all of a sudden you had the Bay City Rollers, Gary Glitter, disco?’ Bowie, the ‘one hit wonder’, whose record sales had long since overtaken Bolan’s, had ‘gone R&B’, and Bolan tried to follow suit. ‘And the people said, we don’t like it. And that really hurt him, because he cared so much about his music.’

Fame is a capricious mistress.

Jones recalls an occasion when she and Bolan were shopping for shoes. Glancing through the window, Bolan happened to see Peter Green, Fleetwood Mac’s former guitarist, passing by. Perhaps the most gifted musician of his generation, Green had developed acute psychiatric problems after experimenting with LSD. He had dropped out of the music business and was living as a street person. Bolan had always idolised him.

‘Marc said, “That’s Peter Green. I want to buy him a pair of shoes.” So I went and said, “Pete, Marc Bolan’s in the shop and he’d like to buy you some shoes.” Peter was looking at me like, who are these people? But he came in. He accepted the shoes, and that evening he came over to the house and ate dinner with us. Then Marc said, “Are you sure you have somewhere to go?” And Peter said, “No, I’m all right.” And he left. That

was typical of Marc, but people never tell those stories.’ 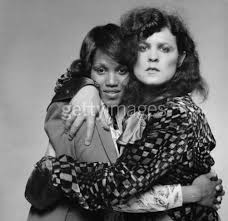 she and Bolan got together, Jones says, they ‘promoted family’. She became close to his parents, and met his aunts and grandmother – ‘she looked like the Queen Mother’. Then, in 1975, Jones became pregnant. The change in Bolan was dramatic. It was only recently that he had checked into a health farm and been told that he had ‘the heartbeat of a 70-year-old’ (he was 25). Now he started to curb his indulgences and to lose weight. Their son, Rolan, was born in September 1975. ‘Marc was so happy and so proud. That baby was a cause of so much joy for him. It was, “This is my woman; I’m marrying her; this is our child; we’re going to grow.” ‘

Bolan’s fortunes seemed to be taking

turn for the better. In 1976 he had his last top-20 hit, I Love to Boogie. And the following year he released an album, Dandy in the Underworld, hailed by critics as his strongest in years. He toured Britain with the Damned in support and, in a gesture which appeared to crown his comeback, he was given his own television show, Marc, with a remit to promote new music. The last programme he recorded featured his old friend and adversary David Bowie as a guest. The pair sang together at the end, on a narrow stage. At the song’s conclusion, Bolan stepped back, and accidentally tumbled off the stage, leaving Bowie standing alone.

was psychic. ‘He was obsessed with James Dean,’ remembers Simon Napier-Bell. ‘And the most amazing thing he ever said to me was, I think I’d like to die in a car crash just like Dean, only I’m so small it would have to be a Mini.” ‘

‘There was always this idea in Marc’s mind of die young and make a good corpse,’ says Keith Altham. ‘That horrible expression? He once said, “I honestly feel it could all end tomorrow. Not just the band thing, I mean life.” And these weren’t

just flippant remarks; they did seem to come from some weird inner conviction.’

‘What I learnt in life,’

says Jones, ‘is that one is chosen to

be there for the good and the bad.’ That night, she insists, she had not been drinking, ‘until later when Marc wanted to celebrate. And then there are responsibilities. Nobody around us was saying, don’t drive; let’s put you in a taxi. When you’re a star you have your valets and your bodyguards. But that night it was just Marc and me. My point is, if we had been in that bad a state, somebody would have said, you guys can’t do this.’ And another thing, she says. That same day a tyre on the car had

been changed, and the mechanic had failed to replace one of the bolts.

At the point on Barnes Common

where the crash occurred, the road curved, the tarmac giving way to gravel. ‘And when we made that turn, we weren’t on the road, we were on the gravel. We’d been driving for 45 minutes and the wheel came off on that hump.’ Jones pauses. ‘If we had been in a larger car,’ she says, ‘Marc would have survived.’