Leander also worked as a producer/arranger with Ben E. King and 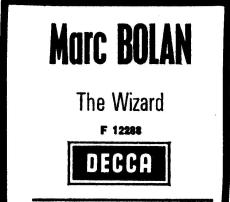 Leaving Home” from the Sgt. Pepper’s Lonely Hearts Club Band album (the only time The Beatles recruited someone other than their producer, George Martin, to provide orchestration.)

Jim Economides, a versatile American producer introduced Marc to Decca Records, who signed him on August 9th, and to the label’s Musical Director Mike Leander. Marc and Leander worked on some songs at Mike Leander’s house before recording at Decca London

on the 14 September, ‘The Wizard’ and ‘Beyond the Risin Sun’ and an American folk standard ‘That’s the Bag I’m In’. Both Marc’s compositions were chosen as tracks for a possible first release and acetates were produced in early October

12th Marc appeared on ‘Ready, Steady, Go!’ promoting his debut single, The Wizard the performance didn’t go well with the backing track playing out of sync. Also appearing on the programme that night were fellow Decca artists The Small Faces, The Nashville Teens and Tom Jones, and, touring in the UK at the time, Wilson Pickett

THE WIZARD / BEYOND THE RISING SUN , was released on November 19th. Both tracks had full orchestral backing arranged by Mike Leander with backing vocals by The

As Marc had been promoting his name as ‘BÖlan’ (being spelt with an umlaut), when he received a demonstration copy credited to ‘Bolan’, he requested that the umlaut’s be added!

The single received a positive review from critic Derek Johnson of the New Musical Express wrote:

‘Try and catch Marc Bolan’s self-penned ‘The Wizard’ – it has a most intreaguing lyric, and his Sonny Bono-like voice is offset by a solid thumping beat, strings and ethereal voices…’

Funfair’ On December 30th Marc returned to the studio for a second Decca session, again under the guidance of Mike Leander, looking for material for the follow-up single, and recorded four demos  – Rings Of Fortune, Highways, Reality and Song For A Soldier. Acetates were produced but the songs were not used.

Leander, unable to secure a deal with any of the new material, lost faith in Bolan, however Economides pushed Marc for further material and was finally presented with a song that the producer felt was suitable for a new single. Taking him to De Lane Lea Studios in London, he brought in popular session bassist John Paul Jones to give the track some edge, this time Marc was fronting a ‘studio band’, playing his guitar and providing his own backing vocals, having the opportunity to double-track his vocal for the first time. The song …THE THIRD DEGREE / SAN FRANCISCAN POET was released on June 3rd 1966.