Problem child is back!

THE downfall of the short-lived yet legendary mod-rock hellraisers John’s Children – whose line-up included a young Marc Bolan – reads like an adult version of The Sound of Music.

As the Von Trapps distracted their audience with So Long, Farewell, escaped from the Germans, and into the darkness, John’s Children caused a riot during their 1967 support set for The Who in Ludwigshafen.

In torn clothes they disappeared into a waiting car, escaping into the night while fire engines with water cannons attempted to quell the chaos they left behind.

The Who kicked them off the tour. This was the spectacular beginning of the end for John’s Children, a band notorious for their onstage fights, banned records, and for bringing shy acoustic folk singer Bolan out of his shell, plugging him into electric guitar mayhem. 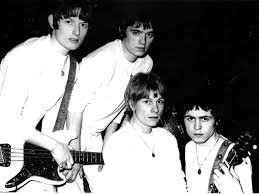 onstage with his guitar,” Ellison tells Grooves. “I think he thought it was getting too out of control, we’ve lost all our equipment and he’d try somewhere else.” Ellison originally met drummer Chris Townson at boarding school, later forming The Silence. Townson and bassist John Hewlett met the Yardbirds manager Simon Napier-Bell during a lost few days in St Tropez, convincing him to come see them play at a swimming pool.

“He got the shock of his life because I don’t think he’d ever seen a band quite like us,” says Ellison.

“I was singing and diving from the top diving board.” 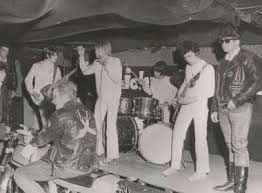 The shrewd Napier-Bell, who later managed Wham! and Japan, dressed the group in angelic white and brought in Bolan.

Once the boys had their first hit, Smashed Blocked, they bought a club in Leatherhead, playing host to the likes of Jimi Hendrix and Cat Stevens. Napier-Bell even shipped over Al Capone’s Oldsmobile, sprayed it white and employed a Hells Angels motorcade.

Time may have passed, but he promises to bring some of that John’s Children performing spirit along, warning: “Lock up your mothers and wear suitable clothing.”