Century Boy would have turned 63 in 2010. Marc Bolan, founder and frontman of the briefly stratospheric glam band T. Rex, prided himself on being ahead of his time. He called his music “cosmic.” He wore glitter before the Glitter Twins. He danced the ‘Ballrooms of Mars’ decades before his space-rock successors.But Bolan, for all his widely imitated star-tripping, burned out right here on Earth, in the passenger seat of a purple Austin Mini wrapped around a tree, less than a mile from his home in a London suburb. In the end, what was most cosmic about the 20th Century Boy was his swift fall from grace.’Bang a Gong (Get It On)’ was T. Rex’s only big hit in

America. In England, however, the band had a remarkable run of eight straight singles that reached either the top spot or No. 2 on the charts, including ‘Jeepster,’ ‘Telegram Sam’ and ‘Children of the Revolution.’ For a few years at the beginning of the 1970s, T. Rex was so popular in the UK that the press likened the phenomenon to Beatlemania and gave it a name — “T. Rextasy.”

Mark Feld, was a devoted boyhood fan of Chuck Berry and rockabilly stars such as Eddie Cochran. After changing his name, he began performing as a mystical folkie, releasing his first single, ‘The Wizard,’ in 1965. With a legendary drug enthusiast named Steve Peregrin Took, who borrowed his own stage name from ‘The Lord of the Rings,’ Bolan formed the original Tyrannosaurus Rex. He quickly grew tired of his partner’s appetites; stories suggest that a bad trip from a spiked punch bowl hastened Bolan’s decision to toss his co-founder out of the band.

electric-boogie sound and a flamboyant stage appearance including feather boas and top hats, Bolan’s band was the toast of London in the waning hippie years. Good friends with fellow glam icon David Bowie, his band played supersessions with Ringo Starr and Elton John. 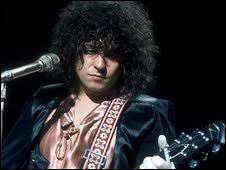 album ‘Zinc Alloy and the Hidden Riders of Tomorrow’ was derided as a weak copy of Bowie’s ‘Ziggy Stardust,’ earning a one-star review in Rolling Stone. By the time of the band’s 12tth and last studio album, the prophetically titled ‘Dandy in the Underworld,’ in 1977, Bolan was hosting an ITV show geared toward young teenagers and attempting a comeback billed as the “original punk.”

16, 1977, after a night on the town with his girlfriend, Gloria Jones (who sang the original version of ‘Tainted Love’), Bolan died instantly when Jones lost control of the car. Journalists on the scene reported that a copy of the NME was open on the backseat to an interview with the Who’s Pete Townshend. The headline was ‘Hope I Die Before I Get Old.’ Oddly, Bolan, who wrote songs about Cadillacs, Mustangs and Jeepsters, didn’t drive. Asked in a 1973 interview where he’d be in five years, he’d replied, “I hope to be alive still.”

legacy was undoubtedly star-crossed. After a decade

of misbehavior, original member Steve Took choked on a cocktail cherry in 1980. The following year bassist Steve Currie died in a car crash in Portugal. Part of Bolan’s legacy, meanwhile, is flesh and blood: Rolan Bolan, his son with Jones, has performed periodically in the 2000s. He was 2 years old when his father died.